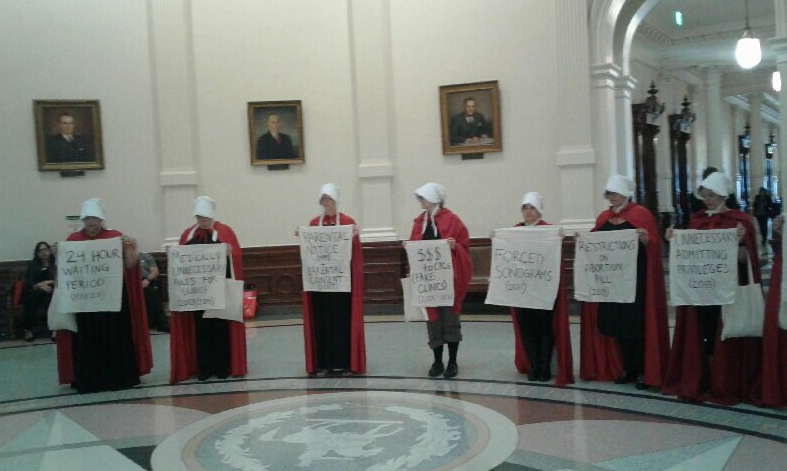 The sight of women protesters in Texas dressed as Handmaids chills my blood. The photograph showing twelve women peacefully protesting surrounded by six armed men fills me with rage. This is Donald Trump’s America, a place in which thirty men gather in a closed room to talk about women’s reproductive and maternity rights in scenes reminiscent of the Saudi conference on women’s rights to which no women were invited.

When Margaret Atwood wrote her dystopian novel, The Handmaid’s Tale in 1985 she used precedent for every seemingly unimaginable scenario that she depicted. Some of those precedents were biblical, particularly the state’s ideological appropriation of the story of Rachel and Leah from the Old Testament but some were political and reflected practices seen in oppressive regimes such as Iran and Afghanistan where women had been pushed out of public life.

What is most troubling about The Handmaid’s Tale is not the reference to oppressive practice in countries such as Iran, Saudi Arabia, Afghanistan but the reference to oppression in societies and countries that claim to be democratic and to uphold women’s rights. Atwood’s forensic spotlight was very much trained on North America and the worrying anti-feminist trends that took flight in the 1980s and which have landed now with the ascendancy of Trump and his grotesque cast of misogynists undermining and destroying the progress that women have made towards emancipation and equality.

A man who sees no wrong in boasting of ‘grabbing (women) by the pussy’ will have no trouble in attacking women’s rights at work, at home and in the privacy of their own bodies. Right wing Republicans, particularly those of the Christian right have absolutely no problem with women’s health and their very lives being subject to the quite extraordinary whims of their distorted ideologies. Even a cursory search for comments made by such people about rape and domestic violence, let alone birth control and abortion yields a torrent of ill informed, deeply troubling polemic that would not seem out of place in the 1700s but which today is nothing short of abhorrent. ‘Legitimate rape’ in which a woman’s body ‘shuts down’ so as not to get pregnant was Todd Akin’s outrageous contribution to the debate on the right to abortion while he was running for public office. Although widely condemned, even by members of his own party he revoked  the apology he felt compelled to make at the time and stands by his repellent views.

The anti-abortion lobby in the USA and increasingly in the UK hold to a particularly hard line on women’s reproductive rights, preferencing the rights of a fetus over that of a fully formed, living, breathing human being. Interestingly, these people are not so vocal about actual children living in extreme poverty or actual children suffering abuse, violence and neglect while making huge, moralistic claims about the right to life.  If every life and every child mattered to these people they could do a great deal of good in the world by working tirelessly to eradicate child misery. Instead they choose to intimidate women and health professionals by standing outside clinics and interfering in people’s lives.

Reproduction is at the heart of Margaret Atwood’s novel. A major environmental incident has resulted in fertility being compromised. In true Old Testament spirit, women are deemed to be responsible for this and it is a crime to suggest men might be infertile. The handmaids are women reduced to the level of walking wombs. They are women seen as morally ‘unfit’ for anything other than breeding for the state. Some are divorcees, others activists, others unmarried mothers.  Offred, the protagonist is an ‘unfit’ woman adjudged as being of low moral value. She is imprisoned by the state not knowing if her husband is alive or dead. Her beloved daughter has been confiscated and adopted by a family considered as ‘fit’ to raise a child. She is assigned a commander and his wife and her sole purpose is to become pregnant through the enactment of monthly state-sanctioned rape.  If the handmaids do become pregnant there is no guarantee of their safety or any change in their status. They are subject to the whims of the commander’s wives who are allowed to hit them. Pregnant handmaids have been attacked by jealous wives. There are no guarantees that a healthy baby will be born at the end of a pregnancy due to the impact of the environmental disaster and successful pregnancies are rare. The births are grotesque spectacles with all handmaids in the district forced to attend, no pain relief or medical support for the mother except in cases of medical emergency and the ritual handing over of the baby to the wife immediately after birth with no care or attention to the birth mother.

The red garb of the handmaids and the white winged head dresses are designed for stigma and oppression. Red denotes their status as brood mares but also their stigmatisation as women whose former sexual behaviour marks them out as sinners, moral transgressors of the Puritanical mores of the state. The head dresses limit their field of vision and their capacity to engage with the world and with others. They are isolated and reviled. They are also subject to the control of other women, the terrifying Aunts in the Red Centre – collaborators with the state, the wives whose homes they live in and other handmaids. Each handmaid has a partner to walk with when they go shopping and they act as each other’s spy.  The Nazis well understood the power of utilising women to police each other and this principle was central to the Nazi women’s movement in which some women could enjoy elevated positions without holding actual political power. The Aunts most closely resemble that historical model.

Offred’s story in the novel is horrifying and deeply human. In the Night sections she remembers her old life; her husband, daughter and the freedoms she enjoyed before Gilead. She also indicates the warning signs that were there, the prevalence of extreme right wing televangelists, the anti-feminist backlash, the incremental creep of the religious right towards power.

It’s not until we reach the end of the novel that we realise that Offred’s narrative is historical and is being presented as a conference paper many years post the fall of Gilead. Her fate is unknown. Our final glimpse of her is in her exit as she says ‘ And so I step up, into the darkness within; or else the light.’ We have to assume she escaped, at least for long enough to record her story for posterity and because we have spent a long and intimate time in her company we hope she made it to Canada and freedom but that speculation is both a triumph and a frustration of the text. We want a ‘happy ending’ for Offred but such an ending would have been both trite and insulting to the hundreds of thousands of people who have endured such regimes and who have not survived or who have survived but endured unspeakable damage and loss.

Offred’s story and that of others like her is in safe keeping with Professor Maryann Crescent Moon and Professor Piexoto. Professor Crescent Moon from the department of Caucasian Anthropology is an expert in Gilead studies, a keeper of women’s history, an expert, a woman free in her intellectual life post the apocalyptic dystopia of Gilead.  The conference is an opportunity to re-examine Gilead historically and to understand Offred’s position as person trapped within it.

Sales of The Handmaid’s Tale have rocketed since Herr Drumpf marched into the Oval office and this week’s protests in Texas underline the anxiety that many women are facing in the USA now, today. These are dangerous times and Drumpf and his machinery of zealous oppression are a real and present threat, not just to women but to all who do not fit with his narrow, distorted view. This is a man who plans to scrap the Environmental Protection Agency, a man who denies climate change, a man who plans to end public subsidy for the arts and humanities, a man who plans to defund state education. The horrifying list goes on and on and in spite of brave attempts to stop him in his tracks he looks pretty unstoppable. When policies such as these gather traction and momentum then their outcome is almost inevitable. The USA is looking at much greater influence from the religious right, curtailment of women’s rights on a huge scale and an assault on the environment that could well be irreversible and catastrophic. It’s beginning to look a lot like Gilead.

Of course, America is not alone in its demented swing to the right. Here in the UK swingeing cuts to public services combined with an out and out assault on the poorest and most vulnerable in society have been the prevailing norm since 2010. We have an unelected Prime Minister claiming to be guided by Christian principles imposing austerity and failing to manage Brexit. Britain’s move towards isolationist, backwards looking politics should be concerning us all particularly as we will not have the protections of European law once we are cut adrift. There are MPs here longing to curtail women’s rights particularly with regard to abortion laws and we need to be vigilant.  The tactical use of immigrants as distracting scapegoats is doing its job in keeping the focus away from what our draconian government is doing to civil liberties. It may not be long before Margaret Atwood’s frightening and prescient novel is as relevant here as it is in North America.